Where your Christmas trees come from

American tree farmers harvested at least 17 million Christmas trees each year, according to the most recent USDA Agricultural Census. And nearly half of these trees -- about 8 million -- come from just six counties in North Carolina and Oregon.

Topping the overall list is Ashe County, North Carolina, which produces just shy of 2 million trees per year. That's nearly 100 for every man, woman and child living there. The Ashe County Christmas Tree Association (motto: "Real Families Choose Real Christmas Trees") boasts that the county is the biggest tree producer east of the Mississippi. But the latest numbers show that Ashe County is now, in fact, the largest producer of trees anywhere in the U.S.

Coming in behind Ashe are four Oregon counties: Clackamas, Marion, Benton and Polk. New England, the mid-Atlantic, and Wisconsin and Michigan are also well-represented in the tree harvest figures. You'll notice that the contours of the map generally comport with the boundaries of the coniferous (green) and mixed (purple) forests in the map of North American forest cover below, from Michigan State University. 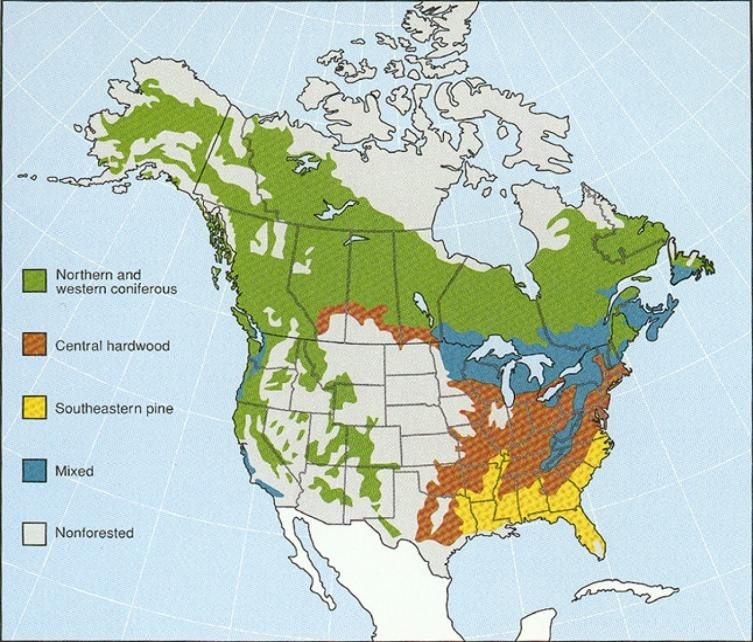 The USDA Census compiles data from farms registering over $1,000 in annual sales, so little mom-and-pop operations that open their back yards to cut- your-own sales once a year probably aren't included above.

For instance, I lived in Vermont for a few years. One Christmas I got a tree from a house down the road, where there was a bucket out front with some saws and twine, and a sign instructing visitors to chop down the tree of their choice and slide a few bucks under the doormat. I never met the owner --the whole set-up could have been a prank played by cruel neighbors while the residents were on vacation, for all I knew. But regardless, an operation like this wouldn't be included in the USDA's numbers.

It's fun to imagine NCTA and ACTA rumbling like Sharks and Jets at industry events, dance-fighting to holiday music. And overall, the fake tree industry seems to be gaining the upper hand. A 1989 Gallup poll found that Americans preferred real trees to fake ones, 52 percent to 40 percent. Fifteen years later, a 2004 Washington Post/ABC poll found that the share of Americans displaying real trees fell to 37 percent, while those preferring artificial rose to 58 percent. Now the split is 80/20 in favor of fake trees, according to Nielsen.

“Ashe County offers much that enhances work environment and quality of work life&#8212;the work ethic of people who will apply for jobs, the helpful attitude of local vendors, the commitment of local leadership to tackle problems that affect industry and the business community as well as the beauty that you see out the window. &#160;Also there are many academically talented young people who are looking for an opportunity in the area. Hiring locally has been a smart way to grow McFarland.”
Rhonda Herman, President of McFarland Publishing